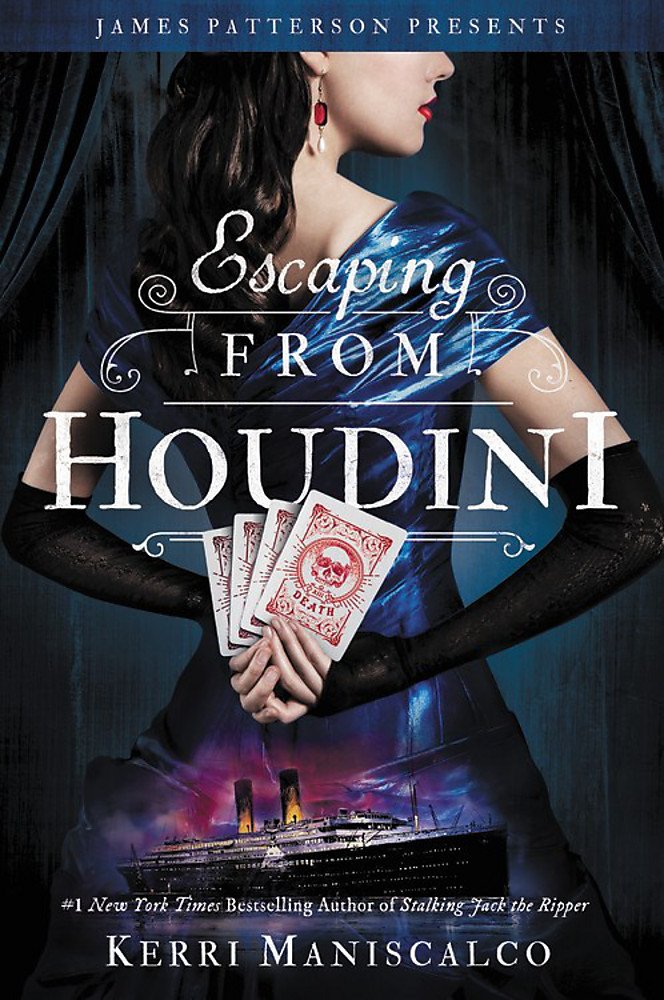 Escaping from the king of escapes

It’s week three so here is book three of this dark but thrilling series. The famous person in this book is Harry Houdini.

For those of you who do not know him. Harry Houdini was a Hungarian-American magician who was famous for his escape acts.

At the end of ‘Hunting Prince Dracula’ Audrey Rose and Thomas heard that doctor Wadsworth, Audrey Rose’s uncle, got invited to investigate some murders in America. To do this job well, he needs his two best assistants. So he came to get them from Romania.

This book is set during the boat trip to America. On the boat, Audrey Rose hears that her cousin Liza is missing. Our travelling companionship also got the news that there is a circus on board. The circus will perform every night.

On the first night, they noticed something mysterious about the circus acts. After the first act, a girl is found dead with playing cards in her back.

Of course, doctor Wadsworth and his two assistants start an investigation. During the second show, they discover that cousin Liza is part of the circus because she fell in love with the magician.

This is convenient for the investigation because our heroes suspect the circus artists. Liza allows Audrey Rose to interview the artists without being suspicious.

The bodies, that get discovered every night, have one thing in common. They are all killed in a way that looks like tarot cards.

Liza introduces the magician to Audrey Rose. It is Harry Houdini. Besides the fact that running away with a man is bad for Liza’s reputation, Audrey Rose doesn’t really mind that. Until she discovers that he communicates with another woman in America.

Now she has two jobs to do: solving the murders and convincing her cousin about Harry’s viciousness.

This book is still an amazing crime novel and the mysterious mood the circus sets makes it so magical. But the name Houdini is in the title, so I expected him to be at least a side character. Now he is just mentioned. His addition to the story does drive up the romance. Audrey Rose and Thomas also risk their lives for each other. That is less to my liking, but it is still not too cheesy.

You can also check-out this review in Dutch on: Escaping From Houdini – Ontsnappen aan de… | Gent Leest