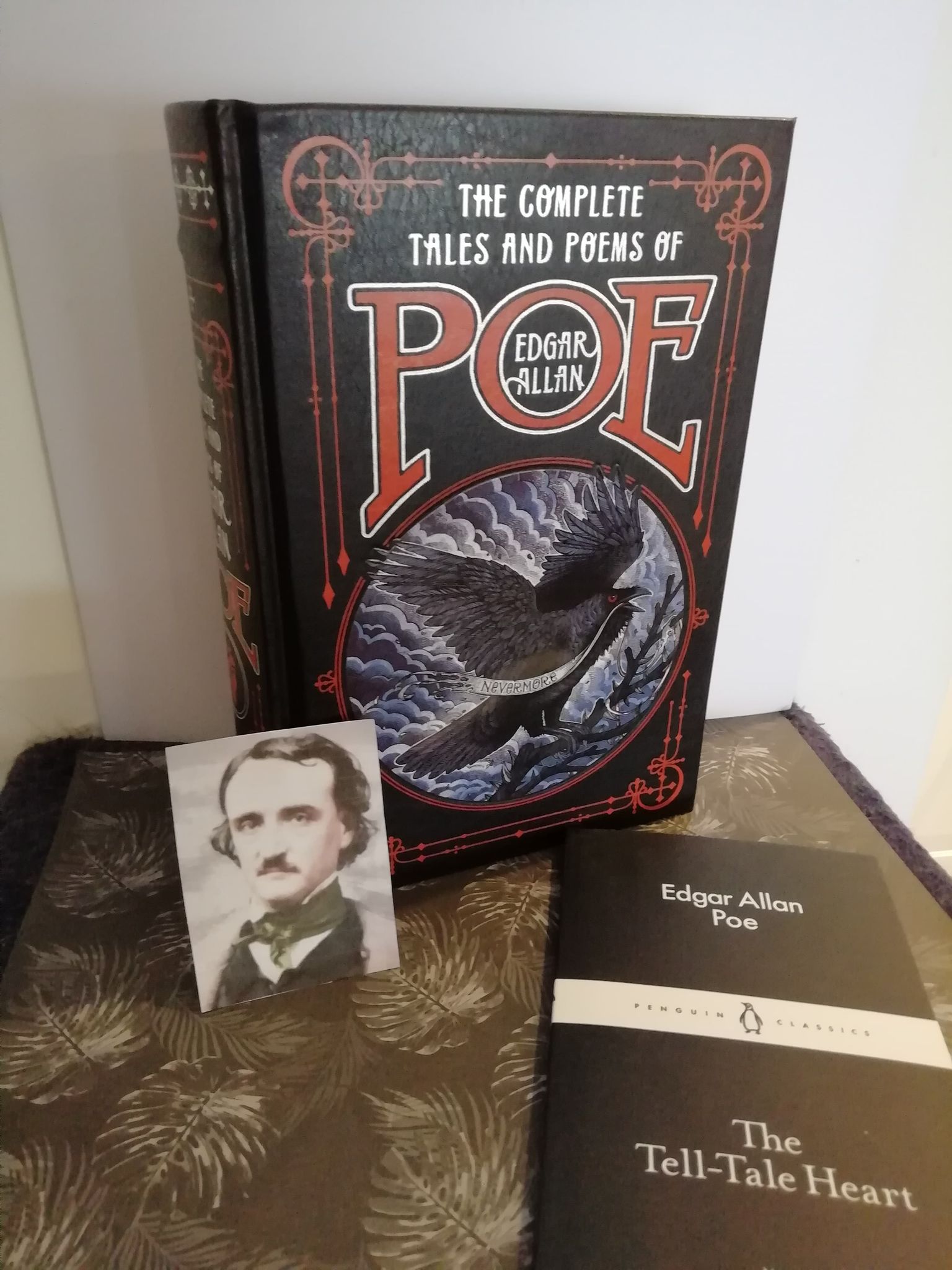 His life filled with tragedy

Edgar Poe was born on January 19 1809 in Boston. His parents were Elizabeth Arnold Poe and David Poe Jr. By 1811 tuberculosis struck Elizabeth down. Some people say that David died shortly after, others say he just left. One thing was sure, Edgar and his two siblings needed new parents. All three of the children were placed in a separate family, so Edgar grew up without his brother William and sister Rosalie.

Edgar went to live with Frances and John Allan. He called them Ma and Pa. Pa was a successful tobacco merchant in Richmond Virginia. Poe had a great relationship with his new Ma, but there would always be a problem between him and John Allan. Besides the problems, Poe got baptized in 1812 under the name Edgar Allan Poe.

Poe started writing poems at the age of 13 but was discouraged to do so by John Allan and his headmaster. Some say that Poe started to write the poems on the backs of John’s business papers.

In 1826, Poe went to the University of Virginia. He was top of his class but didn’t receive enough funds from John Allan. The solution? Poe started gambling. Of course, this caused debts. After a short while, he came back home. Only to discover that his fiancée Sarah Elmira Royster became engaged to someone else.

So a year went by and Poe joined the army. He excelled in everything he did and published his first book. But in 1829 Poe heard that Ma was ill. She died of tuberculosis before he was able to return to Richmond.

John Allan wanted him out of his way so he helped him to get into the United States Military Academy at West Point. But shortly after Poe’s start, John decides to remarry. This did not sit well with Poe, so he misbehaved and got expelled from West Point.

This gave him the chance to focus full-time on his writing. He had published his third book by this time.

In 1834, John Allan dies without leaving anything to Poe. This was not surprising because Poe had been living with his Aunt Mary Clemm in Baltimore since 1831. He lived there until 1835. Mary’s daughter, and Poe’s cousin Virginia, soon became his literary muse and love interest. They married when she was only 13. Sadly enough tuberculosis took her as well in 1847. Overcome by grief, Poe started drinking.

His work as a writer, critic and editor

In 1827 he self-published his first book ‘Tamerlane and Other Poems’ under the pseudonym ‘A Bostonian’. He kept writing poems even when he was in the army. By the time he left West Point, he had published three books.

But he was still looking for a steady writing job. Shortly after John Allan’s death, one of his short stories won a contest in the ‘Baltimore Sunday Visitor’. This motivated him to publish more short stories.

He landed an editorial position with the ‘Southern Literary Messenger’ in 1835. This is where he became a literary critic and a cut-throat one at that. It earned him the nickname ‘Tomahawk man’. In 1837, they forced him to leave because they found him too brutal. After this, he bounced from magazine to magazine. But he kept writing and publishing his poems and short stories.

In the late 1830s Poe published ‘Tales of the Grotesque and Arabesque’ which was a collection of short stories. And in 1841 Poe launched the new genre of detective fiction. He did this with his ‘The murders in the Rue Morgue’. In 1843 he even won a literary prize for his detective story ‘The Golden Bug’. This gave him the nickname ‘The father of the detective story’.  He published ‘The Raven’ in 1845. It made him an international sensation, but The Evening Mirror only paid him 15 dollars for it. Because of this, some sources say that he was an advocate for higher wages for writers and international copyright law.

On September 27 1849 he left Richmond for a business trip to Philadelphia. No one saw or heard from him until October 3. That’s when he was found in great distress in Baltimore. He was taken to the Washington College Hospital, but he died four days later. At that time they called his cause of death ‘congestion of the brain’. Which means brain cancer. Although no one really knew what happened, there are so many theories about Poe’s final and missing days that could have lead to his death.